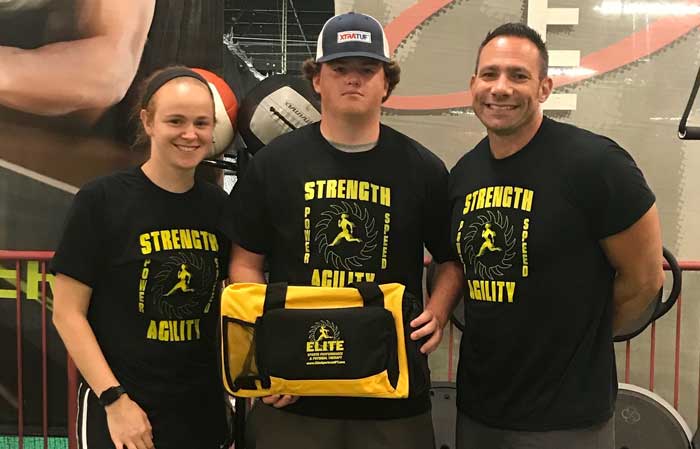 Cole Baker has been a dedicated member of Elite’s Athlete Training program since 2016.  Hailing from Wrentham, MA, Cole is a standout athlete for the King Philip Regional High School Warriors. Cole has been preparing all summer for his junior year of football and looks to continue the Warriors’ success on the gridiron. Last December, the KP Warriors took on Lincoln-Sudbury in the Division 1A State Championship at Gillette Stadium and the game came down to Cole needing to hit a last-second field goal from 31 yards out. Putting nerves aside, Cole made the crucial kick and put the Warriors up 3 to secure their 25th consecutive win and 2nd MIAA Division 1A State Championship in 2 years!

Over the last two years, Cole has become extremely focused on his kicking game and has attended some of the best camps in the nation. Most recently, he attended Kohl’s Kicking Camp in Michigan and received top-level coaching from some of the premier kickers and punters in the country.

Cole’s continuous dedication and hard work this off-season will hopefully set him up for another successful season with the Warriors! He is constantly training with a smile on his face (this picture is deceiving!) and brings a different kind of energy to the training floor. Cole is always ready for something new and gets excited about a new challenge. He especially enjoys competing with his sister, Abby, during training and loves to push her.

Elite is excited to announce Cole Baker as our Athlete of the Month for August 2018!  We appreciate the excitement and energy Cole brings to Elite, and we are excited to see what the future holds for this rising star.  Congratulations, Cole, and good luck this fall!

Gillian Gordon, 17, hails from Canton and is this month’s Athlete of the Month! Gillian pitches and plays second base on the Canton High School…

Julia Marsden, 16, hails from Norfolk and is a junior at King Philip Regional High School in Wrentham, MA. Julia began training at Elite during…