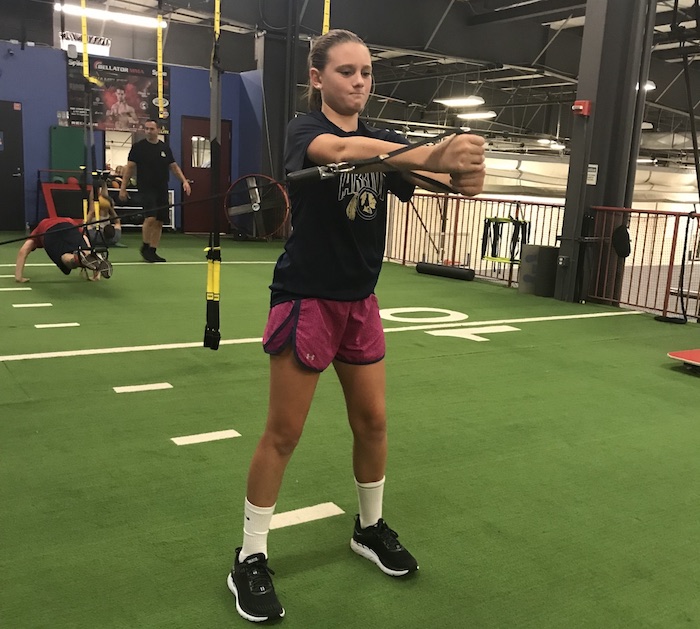 The anti-rotation cable press, known to many as the ‘Pallof Press,’ is a core strengthening and stabilization exercise commonly used in both physical therapy/rehab and sports performance programs to help return patients from injury and improve athletic performance. It is so commonly used because it addresses many functions of the core with a relatively easy setup. The Pallof Press requires the athlete to perform an ‘abdominal brace’ and activate the core musculature while resisting trunk rotation, posterior pelvic tilt, and lumbar extension and maintaining a neutral spine posture. The Pallof Press essentially challenges the core in its most functional state (i.e. neutral spine position), rather than other positions which can place increased pressure on the spine and surrounding soft tissues. The Pallof press can be a great exercise not only for improving functional core strength and stability, but also help in the recovery of many backs, hip, and lower body injuries.

While there are many variations of the Pallof Press, including single-leg variations, the standard version has the athlete standing with feet hip-width apart, in an athletic position with a slight knee bend, shoulders back and neutral spine position. Using both hands to grip the band or cable, the athlete brings the cable to the center of their body. The athlete then braces the core and presses in a linear direction away from the body, resisting the rotational force of the band or cable back towards the attachment site. Certified Strength and Conditioning Specialist, Katie McCarthy, demonstrates an excellent example of a Pallof Press using our Keiser functional trainer.

During a typical day at Elite, you’ll often see several clients and patients performing some variation of this versatile, effective, and simple exercise to improve core strength and stability. All of Elite’s sport-specific training programs include a strong focus on improving core strength and stability, which is so essential to maximizing athletic performance and improving resistance to injury.

Many sports performance athletes at Elite spend on average 2-3 days per week training to improve their performance on the field, court, track, or in…