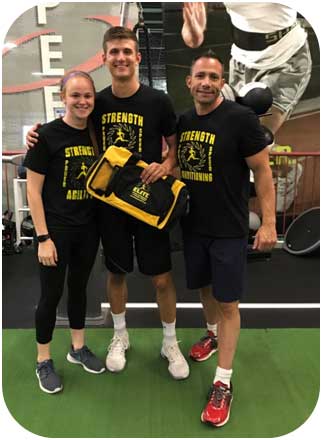 William “Billy” Byrne Lahart, 19, of Franklin, MA has been training at Elite Sports Performance & Physical Therapy in Foxboro since February 2016.  He continues to see improvements in strength both on and off the basketball court.  With his contagious energy and dedication to improving, Billy is a tremendous athlete and an astounding role model!

Billy was named co-captain and Catholic Conference All-Star his senior season at Xaverian Brothers High School.  Billy then went on to play a post-graduate year at Deerfield Academy, but unfortunately suffered from a broken foot and missed most of his season.  However, Billy is one to never become discouraged, he remained disciplined during his rehab and was back to training shortly thereafter.  The Elite staff continues to be mindful of injury prevention with consistent stretching before and after training sessions, making sure to always incorporate Billy’s favorite dynamic stretch – the inchworm!

After returning from Deerfield, Billy increased his strength training regimen at Elite, attending daily, and worked on developing his basketball skills with Tim Forbes at Top Flight.  He heads to Bates College this fall, stronger and more mobile than ever, to continue his education and basketball career for the Bobcats!

Here at Elite, a “good athlete” is much more than just being great at a sport, you must prepare your mind and attitude for being the best you can be.  Billy encompasses all this, in addition to a positive mindset with good practice habits and a healthy lifestyle, which is why we are proud to announce him as our Athlete of the Month for September 2017!  Billy may be one of the “Elitest,” hardest working and most dedicated athletes we have ever had training at Elite.  He always goes the extra mile and offers encouragement to those younger than him – “be a leader and show up every day with a smile and a positive attitude.  Attitude is everything.” Billy believes the most important characteristic of any athlete is true grit – the passion, perseverance, and courage to overcome adversity.

Billy’s goals and aspirations after Bates are to host a late-night talk show on a major television network, become a rock star, and write a great American novel.  We are sad to see him leave, but excited to see the impact he will make at Bates!  A well-deserved award for an amazing young man, continue to make Elite proud and be sure to ‘get after it!’

Emily Sawyer, 16, hails from Wrentham and is a junior at King Philip Regional High School. A force to be reckoned with on the volleyball and…

Nate Rivera, 11, hails from Canton and has been training hard at Elite Sports Performance & Physical Therapy in Stoughton since last fall. A…