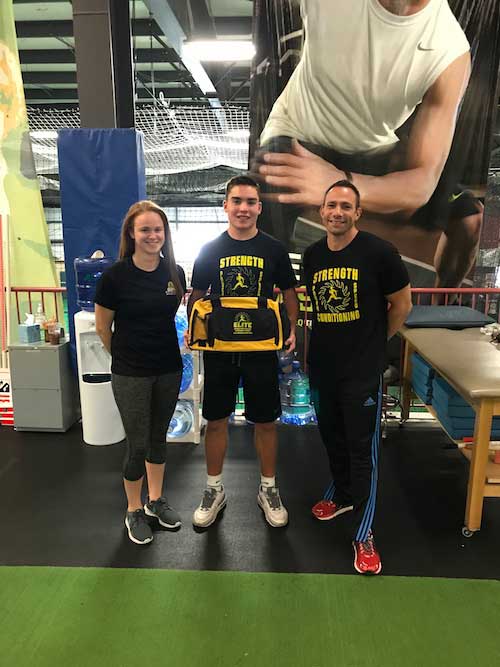 Tyler Boulter, 17, senior at Mansfield High School, has been training at Elite Sports Performance & Physical Therapy in Foxboro since September 2016.  Over the last few months, Tyler has increased his training time at Elite to prepare for his upcoming basketball season for the Hornets, attending almost daily!

Given that Elite Sports Performance & Physical Therapy is located inside Mass Premier Courts, one of the largest basketball facilities in New England, it’s no surprise that we see a lot of athletes recovering from ankle and foot injuries.  In fact, one of the most common injuries we see at Elite is an ankle sprain, which Tyler previously suffered from.  After intense rehab with Physical Therapist and Board Certified Sports Clinical Specialist, Ben Godin, PT, DPT, SCS, Tyler was named ‘most improved player’ at MHS – he came back stronger and more flexible than ever!  Despite Tyler’s minor injury, he continues to thrive on the Hornets team, as a three-time Hockomock League Champion and will be named captain during his upcoming senior.  Tyler’s proudest moment in his basketball career thus far was when he stepped foot on the court and hit ten three-pointers in a single game, setting a new school record!

Most of our younger athletes know Tyler and look up to him, not only at Elite but throughout the MPC community, he volunteers year-round at sports camps & basketball clinics to help others who love the game like him, improve their basketball skills.  He pushes them as much as he pushes himself, constantly looking for new ways to improve his game.  Since adding plyometric exercises and use of the Vertimax, a training tool proven to increase athlete’s vertical jump and first-step quickness, into Tyler’s current strength training routine, he has seen significant improvements in his lower body power and strength — Tyler is now sprinting the fast break, tying up defender’s feet with his deadly crossover, quickly driving to the rim and (almost!) throwing it down with authority.  We look forward to catching one of Tyler’s homes games this season.

After his basketball season and senior year come to an end, Tyler hopes to continue his education at Northeastern University.  We would like to congratulate our newest Athlete of the Month for November 2017 –  Tyler Boulter!  Keep up the good work and continue to ‘GET AFTER IT!’