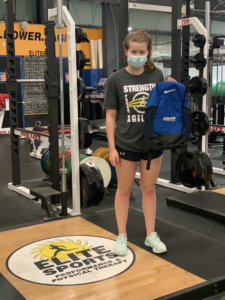 Allison (Ally) Jacques is a 13-year-old elite level swimmer for HAY Lightning Swim Team and began training at Elite Sports Performance and Physical Therapy in Foxboro about 4 months ago. Ally first arrived at Elite with the goal of gaining strength to avoid repetitive motion injuries from swimming but quickly found out that strength training would also help improve her performance significantly in the pool!

Even after only four months of training at Elite, Ally and her swim coaches have seen a notable improvement in her starts, specifically her power off the blocks and 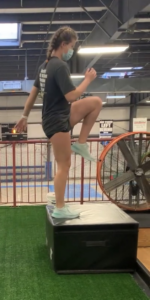 reaction time. Ally is one of those athletes that will put everything she’s got into a workout and is always up for a new challenge. She never makes excuses because as her swim coach tells her, “Excuses are the nails that build the house to failure.” This philosophy constantly motivates Ally to keep pushing through (or pulling through – swim pun intended!).

As a swimmer, and like athletes in many other sports, Ally’s  core strength and stability are extremely important to her performance in the pool. Elite’s Strength and Conditioning Coach, Katie McCarthy, CSCS, has programmed some intense and effective core stability exercises for Ally, but her favorite so far is the physioball plank. Ally dreaded this exercise at first but quickly realized how beneficial it is to her! Ally loves the friendly, supportive atmosphere at Elite and that the coaches are constantly challenging her while also encouraging her. With a constant smile, and the occasional giggle, Ally puts the work in to get better so she can get the results she wants.

Ally has been swimming competitively for 7 years now and has had great success in the pool so far. Ally is one of the Top Ten swimmers in her age group and has been for the LAST 3 YEARS! Ally won 7 medals last year in her age group, has set 2 team records, and has competed for her team in competitive meets around the country!

Ally has some lofty goals for her high school career. She wants to compete in the sectional and state tournaments, as well as break the current records at her high school. After high school, Ally hopes to continue her swimming career in college, hopefully at UCLA!

Here at Elite, we have no doubt Ally will accomplish all of her goals. With her dedication and work ethic, the sky is the limit for Ally. We are excited to announce Ally Jacques as Elite’s Athlete of the Month for March 2021! Congratulations, Ally!

Elite offers Sports Performance and Athlete Training programs at both our Foxboro and Stoughton locations. To learn more about our programs for athletes of all ages and sports and how you or an athlete in your family can become our NEXT Athlete of the Month, click HERE or email us at EliteSPC@EliteFitCenter.com! 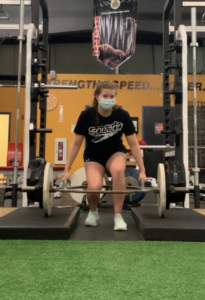 In this month’s blog post, we discuss the importance of strength and conditioning for athletes who participate in early specialization sports. In…