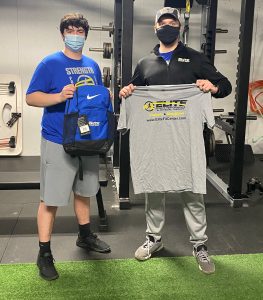 Brendan Cross, 17, hails from Easton and attends Oliver Ames HS, where he plays goalkeeper for the OA soccer team and is a defender for the lacrosse team. Brendan began training at Elite over a year ago with the goals of improving his overall fitness and conditioning and becoming a better athlete. During his time at Elite, he has seen great improvements in his overall fitness and athleticism. He tells us that he’s become “much more agile, strong, and confident.” He also revealed that he never enjoyed training prior to Elite but that has changed: “I’ve learned to enjoy working out and I really like the atmosphere at Elite.” Working under the supervision of Elite Strength & Conditioning Coach, David Siwiec, CSCS, Brendan tell us his favorite exercise is the hex bar deadlift, while his favorite dynamic stretch is the back pedal drill.

Brendan’s proudest accomplishment came recently when he was selected to be captain of his lacrosse team during his final season at OA. “It 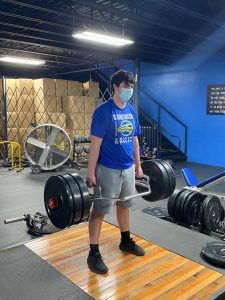 was my proudest moment. I can lead my team in my final season…I was very humbled to be given this opportunity from my teammates and I will not waste the chance.” When asked what defines a true athlete, Brendan believes “a true athlete works hard when no one else is watching…confident, hardworking, perseverance.” When asked what advice he would give younger athletes, he would tell them, “Mistakes will happen, but you have to take them as a chance to learn and get better.”

No stranger to adversity, Brendan suffered a major head injury during his junior year soccer season and missed most of the season. However, he worked hard to return for the playoffs and made a key save on a penalty kick in the playoff shootout. With his final HS season approaching, Brendan is training as hard as ever to prepare because he knows these moments are precious. He recalls some good advice he was given in the past and thinks of it often to help motivate his efforts: “That when I leave the field for the final time and turn my back, I’ll know I did all I could to be my best and I’ll have no regrets.”

We’re happy to know that Brendan has no regrets about choosing Elite Sports Performance to provide the top-notch training and support to help him reach his goals. When asked about his favorite part about training at Elite, he says, “The coaches, the atmosphere. Everyone is kind and upbeat, and everyone helps each other get better.” Based on his work ethic, consistency, and commitment to being the best athlete he can be, we have no doubt that Brendan has prepared himself for a tremendous senior season and we look forward to reading about his personal and team success in the months ahead! We’re proud to award Brendan our April 2021 Athlete of the Month honor and wish him the best of luck in his upcoming season. Congratulations, Brendan!

Elite offers Sports Performance and Athlete Training programs at both our Foxboro and Stoughton locations. To learn more about our programs for athletes of all ages and sports and how you or an athlete in your family can become our NEXT Athlete of the Month, click HERE or email us at EliteSPC@EliteFitCenter.com!

Many sports performance athletes at Elite spend on average 2-3 days per week training to improve their performance on the field, court, track, or in…