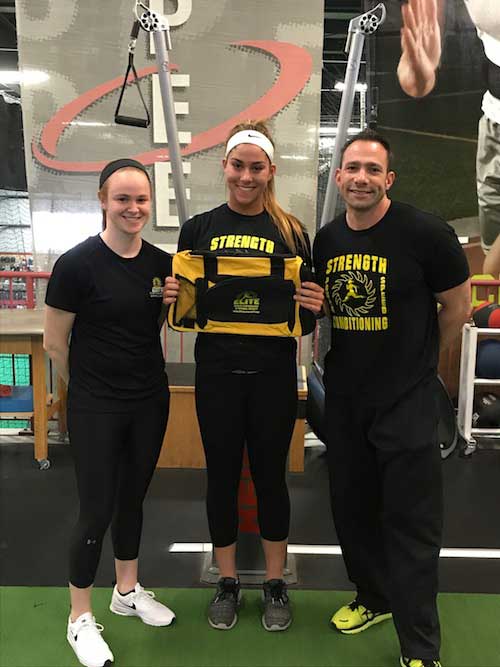 Cailey Sullivan, 18, of Bridgewater, MA, has been training hard at Elite Sports Performance & Physical Therapy for the last six months and has made significant improvements in lower body strength, power, and agility.  All this work has translated to Cailey’s stellar performance on the soccer field, where she has been playing for the last eleven years.  Cailey was recently accepted to St. John’s University, where she will continue her soccer career and study business this fall.

Cailey was a standout goalie at Bridgewater-Raynham High School receiving numerous awards; including the honor of ‘Player of the Week’ by The Boston Globe, Old Colony League All-Star, and All-Scholastic.  After completing an intense strength and conditioning program at Elite each day, Cailey almost always finishes each session on the challenging Woodway Force treadmill, proven to increase velocity.  If you don’t find her on the Woodway Force treadmill, she will be completing the arduous Medicine Ball Run!  Clearly, Cailey is not one to shy away from hard work, which is part of the reason why she has been so successful at Elite!

Her incredible work ethic, talent, and commitment to Elite show just how much of an athlete Cailey truly is.  She has been a great role model for our younger athletes, mostly our young female soccer players who aspire to play competitive soccer like Cailey someday.  We wish Cailey the best of luck at St. John’s and can’t wait to see how she elevates her soccer career to the next level!  Congratulations to Elite’s Athlete of the Month, Cailey Sullivan, for May 2017!  Way to get after it!