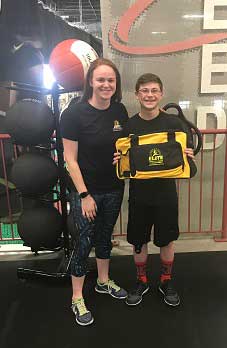 Max Farley, 14, from Mansfield, has been training at Elite Sports Performance & Physical Therapy for the past 3 years. He has progressed his training program over the years from focusing on speed and agility as a younger athlete to a more comprehensive (and at times, grueling!) full body strength & conditioning program as he prepares for the rigors of wrestling and football at the high school level.

Max finds extra motivation from one of his role models who also trains at Elite, professional MMA fighter, Don Shainis. Don encourages Max to get through his workouts by continuously pushing him to work harder and get the most out of every workout. In addition, Max’s father, Eric Farley, is a Physical Therapist at Elite and an accomplished former collegiate wrestler himself, so Max has plenty of support and coaching while training at Elite!

During his time training at Elite, Max has seen excellent improvements in his speed, strength and body control, all key aspects of his two sports. His favorite part of working out at Elite is seeing the progress he’s making as a result of his hard work and consistency. He seems to always enjoy his workouts – the more challenging, the better! With Max’s determination and discipline as an athlete, he is setting himself up for a very successful career as a wrestler and football player at Mansfield HS.

Looking ahead, Max has set some impressive goals, including attending a top university for wrestling such as Iowa, Penn State, and Ohio State. His ultimate goal is to one day wrestle in the Olympics. Outside of wrestling, Max is interested in becoming a police officer or a marine.

We are excited to recognize Max Farley as Elite’s Athlete of the Month for May 2018! We appreciate your enthusiasm, dedication to training, and drive to become the best athlete you can be.  Congratulations, Max, and good luck at Nationals!