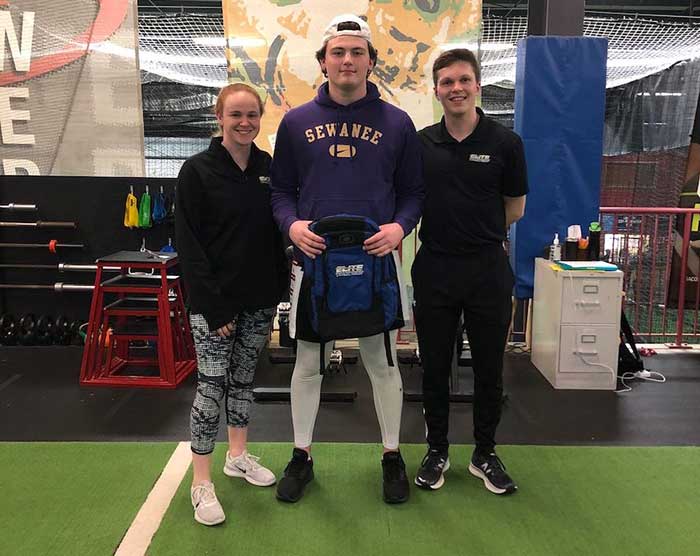 Zach Vienneau, a senior from Mansfield, began training at Elite at the conclusion of his high school football season in December 2019.  Zach played tight end for Thayer Academy in Braintree for four years and is continuing his academic and athletic career in Tennessee this fall at Sewanee: The University of the South!

Zach has been preparing for his collegiate athletic career at Elite Sports Performance & Physical Therapy for about six months now with Elite’s trainers Ben Marsh, BS, NCSF-CPT, CSCS, and Tom Gilson, BS (Elite’s newest Sports Performance Coach at Elite Health & Fitness Center in Stoughton!  Be sure to check him out!) and is looking forward to ‘getting after it’ for the Tigers this fall.  Zach trains hard three or four days a week at Elite and has seen great improvements in both his strength and power.

He enjoys training at Elite as both Ben and Tom constantly push him to get better, while other athletes at Elite motivate Zach to give his maximum effort.  Zach works out alongside other collegiate athletes at Elite who are looking to progress to the next level, and he’s been constantly motivated by these athletes to continue to work hard to accomplish his own dreams.  Zach is known for talking with younger athletes, especially the young football athletes are Elite, about how to become the best athlete you can be.  He advises younger athletes to work hard on and off the field and set good examples for others. Zach loves the football game-day atmosphere and says it is the “most fun you will ever have in your life.” His favorite game day was when he played at Gillette Stadium in the Moose Curtis Bowl. Zach also played basketball in high school, but really fell in love with football and wanted to pursue playing college football because of one of his favorite athletes growing up, Rob Gronkowski.  Zach also looked up to David “Big Papi” Ortiz for his clutch performances and passion for the game!

Outside the gridiron at Sewanee, Zach will be majoring in economics this fall and is ultimately looking to work in the sports management field after graduation.

Elite is excited to honor Zach Vienneau as our Athlete of the Month for May 2019! Congratulations, Zach! We look forward to continuing to work with you this summer in preparation for your collegiate career!

Brenna Hoyt, of Foxboro, is a sophomore at Foxboro High School and plays volleyball and softball for the Warriors. Brenna arrived at Elite in…