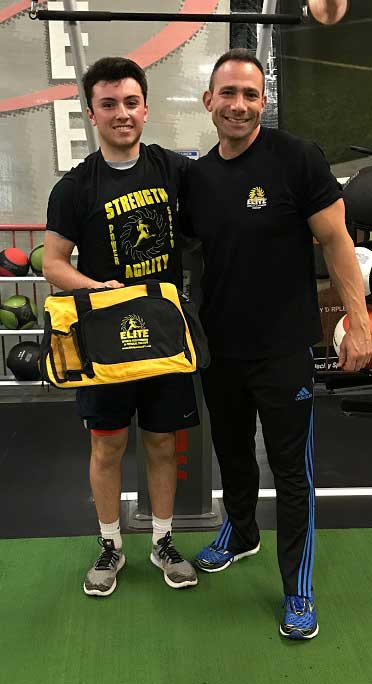 Anthony Mollica, a junior at Foxboro High School, came to Elite with motivation and a desire to improve his strength, power and conditioning in preparation for his upcoming basketball and baseball seasons for the Warriors. Anthony began consistently training in mid-August and over the last few months has seen tremendous improvements in his desired strength and power!

An example for all of us; you can take the time to work out and eat right if it is important to you and Anthony did just that. He is eager to head into his upcoming junior season both mentally and physically, knowing he is stronger and faster than ever before! Anthony “trains smart,” applying himself and working through each challenging movement; he is always asking questions of Elite’s experienced training staff and looking for new ways to get better, sustain the impeccable form and complete the perfect rep. Elite’s staff describes him as fearless, tenacious, mentally tough and coachable. Anthony is always smiling, no matter the day; he is a pleasure to have at Elite. Over the years, Anthony’s effort has not gone unrecognized, he was named the runner-up for the 2016 Hockomock Underclassmen of the Year, as well as All-Star Honorable Mention for the Hockomock and Sun Chronicle.

Anthony truly enjoys Elite’s structured, supervised and organized training program and can attest to the fact that being consistent with his training has helped him gain overall body strength as well as improve his agility and explosive power. Check out Anthony’s significant improvements below, all within a two-month time period. It is unbelievable how far he has come in such a short period of time. He increased his standing broad jump (measures explosive lower body power) by 15+ centimeters. This is a common fitness test in both the NFL Combine and the Olympic Games. Anthony also knocked off 0.64 seconds of his T-test time (measures speed & agility while moving in a specific running pattern).

We are excited to celebrate success and Anthony’s journey as a member of Elite. We are ecstatic to announce him as our Athlete of the Month for December 2017! An athlete that proves hard work is worth it – Congratulations Anthony and best of luck in your upcoming seasons at Foxboro High School! We look forward to the opportunity to continue working with you.