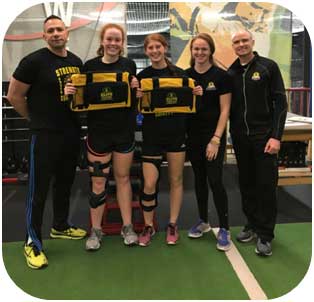 Grace Maher, of Mansfield, and Zoe Chazan, of Easton, both arrived at Elite Sports Performance & Physical Therapy in the spring of 2017 under unfortunate circumstances; they had both recently suffered severe, season-ending knee injuries that required reconstructive surgeries. Both Zoe and Grace had suffered ACL tears – Zoe while playing soccer for the Boston Breakers club team and Grace while playing lacrosse for the Mansfield Hornets – that ended their respective seasons and thwarted many of their plans for the summer. However, they also both arrived at Elite with many shared qualities that would serve them well during their long rehab journey, including a tremendous work ethic, a level of maturity and focus beyond their years, and most of all, a relentless drive to return to the sports they loved. They spent countless hours in the clinic and gym, away from teammates and friends, working with physical therapist Ben Godin, strength & conditioning specialists Katie McCarthy and Peter Rappoli, and the rest of the Elite staff as they dedicated themselves to the arduous and unheralded task of rehabilitating from ACL reconstruction surgery.

Fortunately, all of Zoe and Grace’s hard work at Elite has paid off. Zoe, a junior at Oliver Ames HS in Easton, will soon be returning to play soccer for the Boston Breakers club team and is committed to playing soccer at the University of Rhode Island. Grace, a sophomore at Mansfield HS, recently returned to playing basketball for the Mansfield Hornets JV squad. Both of these outstanding athletes have many accolades to their names (too many to mention!), but what has impressed us most about them is their ability to overcome considerable adversity while always maintaining a positive attitude, a strong work ethic, an often-needed sense of humor, and an unwavering commitment to achieving their goals. They have been an inspiration to the entire Elite staff and to many of our other athlete’s training and rehabilitating at Elite, and we cannot think of any athletes more deserving of this honor to kick off the new year. Congratulations, Grace & Zoe, our Elite Athletes of the Month for January 2018!