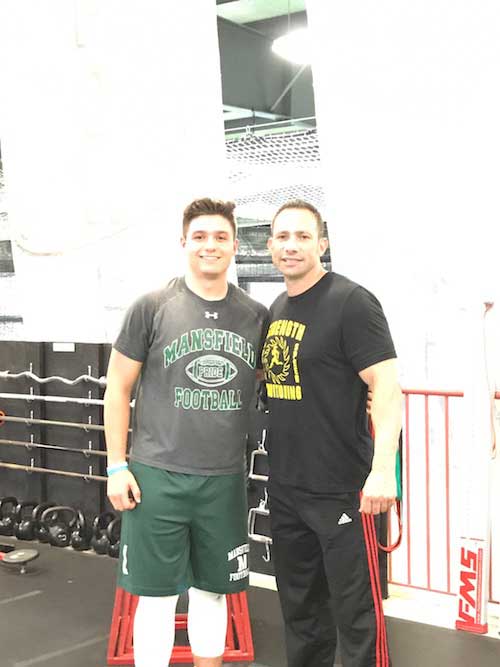 Diogo DeSousa, 18, of Mansfield, MA, has been rehabbing and training with Elite Sports Performance and Physical Therapy in Foxboro for over 2 years now.  Throughout his time at Elite,  both in the clinic and in the sport performance center, Diogo continues to experience increases in lower body strength, power, agility, and conditioning allowing him to excel on the football field and to endure Elite’s Master Trainer, Peter Rappoli’s grueling training sessions.  After an extraordinary career for Mansfield High School’s Varsity football team, Diogo will continue to play football at the University of Rhode Island this fall!

Diogo began at Elite as a physical therapy patient, working closely with Ben Godin, PT, DPT, SCS to rehabilitate his groin and his knee following surgery.  He was extremely determined to return to the field for the Hornets, and as a former soccer player, quickly emerged as a standout kicker for MHS.  Since that time, he has received a number of impressive accolades, including being awarded Hockomock League All-Star, ITHMA All-State Kicker, Mass Prep All-State Kicker, and Boston Herald Eastern Mass 1st Team All-Star.  Along with Diogo’s admirable work ethic and commitment to his craft and training, he is also known around Elite for his positive energy and vibrant personality.  More often than not, you can find him singing and dancing in between sets before he ‘gets back after it!’

Diogo has some great advice for younger athletes, especially those dealing with the adversity of injuries.  His advice is simple and direct: “Work hard, have confidence in yourself, and above all learn from your setbacks and do not let them define who you are.”  We are proud to call Diogo a member of the Elite SP & PT family, and we wish him the best of luck as he continues his football career at URI!  Congratulations to Elite’s Athlete of the Month, Diogo DeSousa, for July 2017!

Rohan Jayaraman, 16, of Foxboro, is a junior at the Wheeler School in Providence, RI and is a member of the basketball program. Rohan began…